Send an email to multiple recipients using Excel and Outlook

This article shows how to code a VBA macro to send a customized email to multiple recipients using Excel and Outlook. Additionally, it shows how the Code VBA add-in helps create the code easily by using its builders.

Before starting, create a table in Excel. In the worksheet with the table data, select the table range and from the ribbon group Insert select Table. After you pressed OK on the Insert Table dialog, the range gets a special formatting, and the ability to sort and filter becomes available. In addition, the range has acquired a name, e.g. 'Table1'.

Create a loop over the Excel Table

In a module, create an empty Sub 'MailingDemo' for the macro and place the cursor in it. We want to loop the rows with the data of Table1, but not the header. Conveniently, the ListObject

has the property DataBodyRange which returns this range.

This introduces a variable rngRows which is set to the Rows range of the DataBodyRange (the data!) of the ListObject linked to the Range named 'Table1':

We now move to the next line and create the For Each-loop over the range rngRows: Code VBA menu: Object » rngRows » For Each

This adds the code

We now need code that, in a row, moves from cell to cell to assign the values to string variables which we will use in the created email. When we add For Each code the same way as with rngRows for rngRow. This code does however not iterate the Cells. To achieve this, we need to add .Cells.

We loop over the cells in the row and assign the value to a new variable depending on which Column the cell is.

Complete the select case as follows, and add the declaration of the string variables on top of the macro.

We now have a loop making the required data available for the recipients and continue with adding code to create the emails in Outlook and showing how the data can be used there.

We want to send an email to each recipient. To achieve this we place the cursor on an empty line after Next rng.
Now on the Code VBA menu select Outlook > MailItem > Create 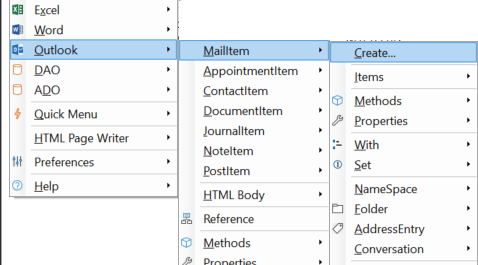 This opens a Fragment Builder dialog to specify the use of the MailItem object:

After OK, the following code block is inserted

We don't want to call the opening of Outlook for each individual record, so we move the line with New Outlook.Application more to the top, outside the Do While loop.

Make a body with customized salutation

The line with variable strBody still needs completion. Put the cursor after the '=' and press Shift-Space to use Code VBA IntelliSense. This opens a context menu with many options to build your string from. Here, we chose the String Builder to make the combining text with variables easy.

As you see, the string builder dialog is filled with the email's invitation text. Using the variables we have a customized email with for each recipient a separate salutation. We added the first and last name variables from the popup selection box and the Add button. Pressing OK inserts the code.

You can now run the macro (F5). The emails are opened in draft. If you extended this code to your satisfaction and all is good, change .Draft to .Send for future enjoy.

Some of the resulting emails: